U.S. markets were closed Monday for the Labor Day holiday. Labor was the focus on Friday after the disappointing jobs release. That report, along with other recent data, has caused us to revise our Q3 GDP forecast lower to a 5.3% clip from 7.0%, and other economists have slashed their outlooks too.

While this should be only a temporary development, it should be sufficient to keep the FOMC, and especially Chair Powell, in cautious mode. After all, it was he who recently stated there is still “significant slack” in the labor market, and this report will only support those concerns. This week’s calendar is heavy on Fedspeak and supply but light on data.

Fedspeak will be the highlight this week for insight into their perceptions on the economy. There are 8 officials on the docket, including several current and 2022 voters. Most of the attention will be on NY Fed’s Williams (Wednesday) who along with Powell and Clarida, is a key decision-maker (the NY Fed holds a permanent vote on the FOMC). His comments will be closely monitored for his perspectives in this environment. He is one of the most dovish on the Fed and we expect he will lean to the cautious side.

Williams will also give opening remarks (Thursday) at a conference on racism. Other Fed speakers won’t have any impact, and none are slated to speak on the economy. Kaplan, a hawk, and nonvoter this year or 2022 will hold a virtual town hall (Wednesday). Governor Bowman (permanent voter) will discuss community banking (Thursday). The dove Daly (Thursday), a current voter, discusses gains The Economic Gains from Equity. And Evans (Thursday), also voting dove, gives opening remarks and the Fed has already indicated he will not be discussing policy or the economy. Also, Kaplan, Kashkari (dove), and Rosengren (hawk) will take part in an event on racism and the economy. The hawk Mester (Friday) speaks virtually before a Bank of Finland conference.

The $3.5 trillion infrastructure bill hit a wall this past week as Sen. Manchin and other moderate opening refused to support it. This combined with the failure in Afghanistan has caused the Democrats to lose political steam to push their increased spending and other initiatives by using simple majority and budget reconciliation.

However, the debt ceiling has passed and Congress will need to authorize an increase soon. Insiders are telling me that Republicans are likely to stand firm and face a possible shutdown as it would be another failure on Biden and the Democrat leadership.

We think the more likely scenario will be that Congress passes a $1 trillion dollar bill similar to the Senate and increases the debt ceiling limit. It will likely increase inflation fears, but not as much as the $3.5 trillion.

Speaking of inflation, the White House quietly increased its inflation forecast to 4.8% annualized from 2%. It does expect inflation to go down next year, but this is more than double their projection.

John Paulson, famous for making billions betting against the housing market in 2008, is hedging against inflation with purchases in the energy and precious metal sectors. Paulson explains in a recent interview, “I think we have inflation coming well in excess of what the current expectations are,” showing expectations for gold by stating that “gold does very well in times of inflation.”

Gold bugs may finally get a win. During the 1970s rising inflation, gold prices increased over 4000% and houses went up 300%. Everything I see is a repeat of history. This doesn’t mean I am suggesting to overload a portfolio with “gold coins.” Please look at our inflation stock picks and dividend ideas. If you haven’t already done so, start moving from growth to more value. As interest rates increase to stop inflation, this will pull capital from growth stocks.

I watch rental rates (which are up over 13%) for real inflation numbers and indications. The second and more common thing to watch is the 10YR. Unfortunately, the government has been playing games with the 10YR, so it may not accurately give you a true idea of the inflation trend. I suspect it will make significant jumps once inflation is “out of the bag.” It is currently up 2.15% and about to break the short-term bear trend. 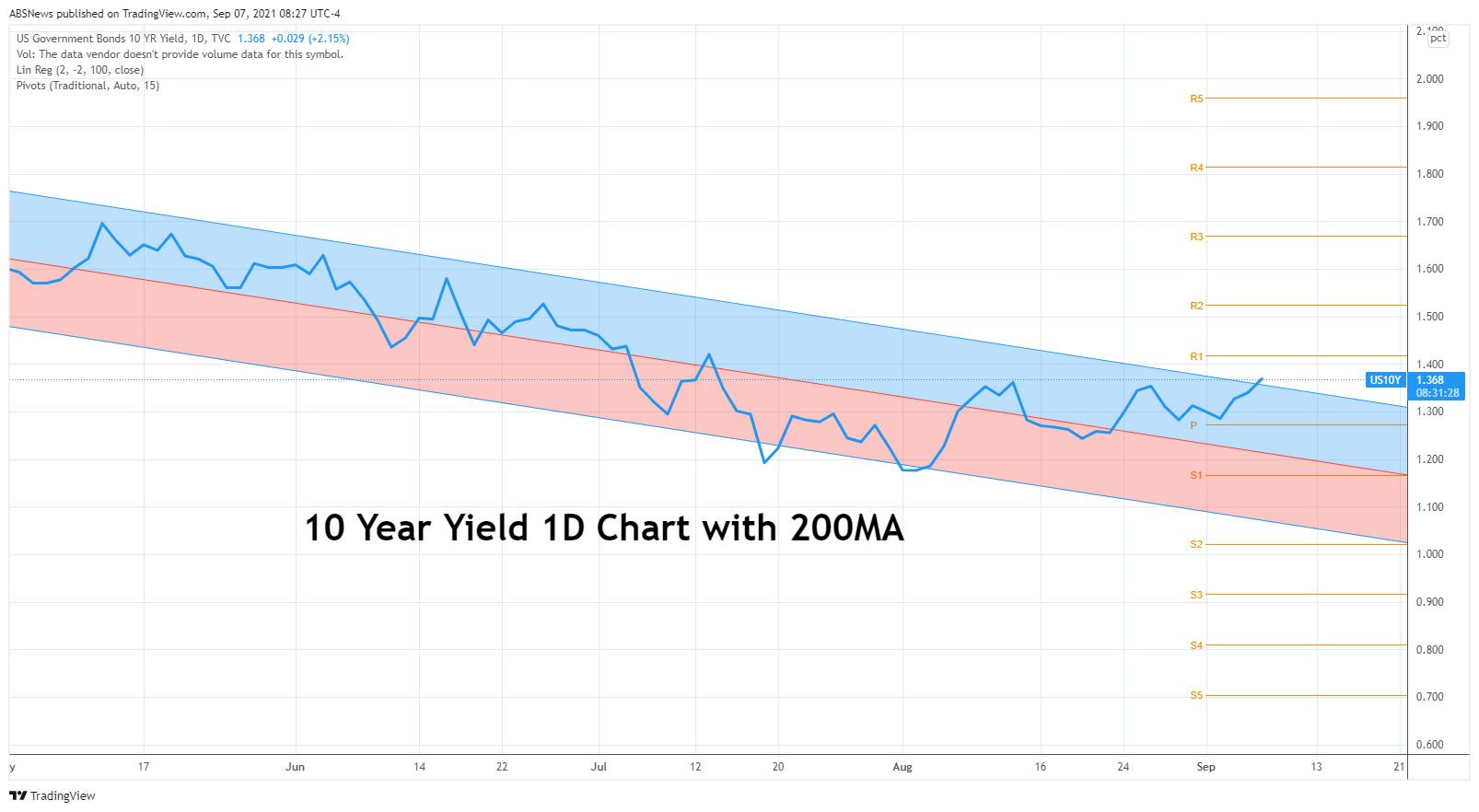 Supply will be an interesting test of domestic and overseas demand. The bond market cheapened measurably on Friday, even after the poor jobs report, instead focused on inflation and auction setup. The Treasury is selling $120 bln in 3-, 10-, and 30-year maturities, including a $58 bln new 3-year note (Tuesday), along with a trimmed $38 bln reopened 10-year (Wednesday) and a reduced $24 bln reopened 30-year (Thursday). Also outlined was an unchanged $34 bln 52-week bill sale (Tuesday). The 3- and 6-month bill auctions (Tuesday) were left at $99 bln for a fourth straight week with $51 bln for the shorter bill and $48 bln for the longer.

The earnings slate is light but there are several heavyweight announcements on tap. Tuesday brings Coupa Software, while lululemon, SentinelOne, Gamestop, and RH are slated for Wednesday, with Oracle, and Affirm Holdings Thursday, and Kroger on Friday.

Canadian markets are closed Monday for the Labor Day holiday. There are two heavy hitters on the calendar — the Bank of Canada’s policy announcement and the August employment report. Our projection is for no change to the 0.25% rate setting at the BoC. The flow of data has undermined the base case scenario for a further reduction in QE to C$1.0 bln by the end of this year.

Indeed, the impact of the Delta variant has introduced fresh uncertainty to the outlook, eroding confidence in the recovery scenario. Consequently, we suspect the BoC will not alter QE next month, opting for later in the year to trim QE by another C$1.0 bln. BoC Governor Macklem delivers an “Economic Progress Report” (Thursday), which should help fine-tune policy projections following the announcement. Overall, the combination of the unexpected drop in Q2 GDP, Statistics Canada’s projection that the economy followed up a damp Q2 with a contraction in July GDP and the upcoming Federal election suggest that the BoC will not rock the boat in terms of the growth/inflation outlook or policy.

Meanwhile, the August employment report (Friday) is expected to show a 100.0k rise after the 94.0k gain in July. The jobless rate is pegged at 7.2% from 7.5%. The forecast risk remains elevated to the downside and upside on the jobs report estimates. Capacity utilization (Friday) is expected to fall to 81.0% in Q2 from 81.7% in Q1. The August Ivey PMI is due Wednesday.