The U.S. jobs report was stellar on every front with a stronger than expected climb in July nonfarm payrolls, big upward revisions to May and June, a hefty increase in earnings, and solid hours worked. Treasury yields reacted bearishly as expected as the data keep the FOMC on course to announce a QE taper later in the year. The wi 30-year cheapened 8.5 bps to 1.965%, while the wi 10-year rose 7 bps to 1.320%, with the 2-year yield up 1 bp to 0.208%. Fed funds futures declined. Wall Street was mixed. Reflation trades picked up steam again, sending the Dow and S&P 500 to fresh all-time highs, while the rise in rates weighed on the tech-heavy NASDAQ.

The economy has recovered significantly since the end of the pandemic, but it still falls a little short of the “substantial further progress” criteria and that will keep the FOMC sidelined for now. Payrolls have reclaimed 75% of the March-April 2020 job losses, while hours worked have recouped 84% of the drop. Meanwhile, the pick-up in GDP through Q21 has recovered 108% of the Q1-Q2 2020 drop.

The labor force participation rate improved to 61.7%, off its 60.2% April 2020 low but is below the 63.4% peak from January 2020. Though Governor Waller suggested a QE tapering announcement could be made in September, we suspect Chair Powell will take a more cautious approach and will want a little more data. And the August numbers should be impacted by the Delta variant and its repercussions.

We still believe November is the earliest the Fed would announce trimming asset purchases, which would begin in January 2022 and extend through the year, with the first-rate hike in 2023. And although the first-rate hike likely is still more than a year away, Fed funds futures declined. Rate hike bets were moved up into the earlier part of 2023 from mid-to later 2023. 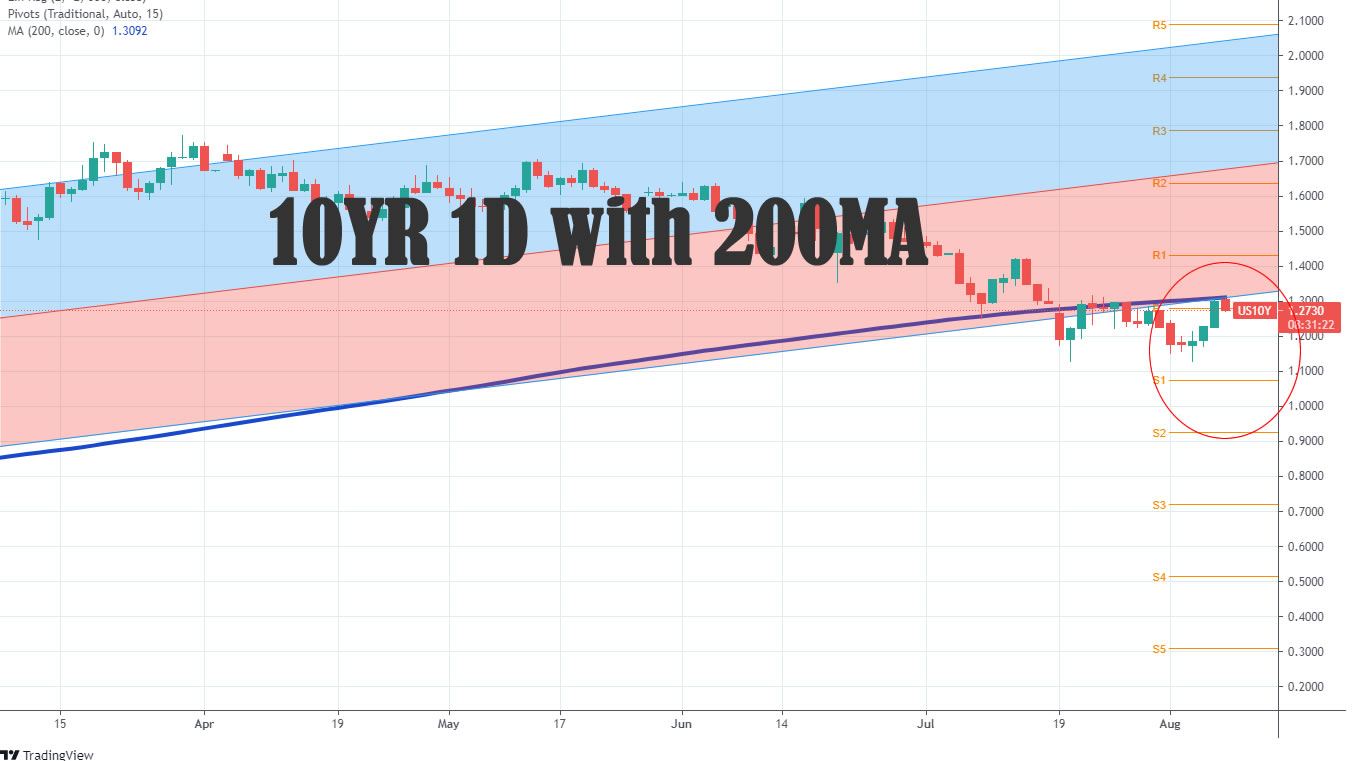 That being said, the 10Year took a jump up last week to 1.30% in what we think is in anticipation of a hawkish Fed. Looking at the chart, we see that it sitting on the 200 day moving average. If it goes above, expect the bullish trend to continue.

In case you missed it, the CDC extended the eviction moratorium despite the fact it was ruled unconstitutional. Reading between the lines, the Biden administration is playing the court game and fully expects it to be overruled again but will give them a few months.

Investors should be watching real estate investments such as REITs that have exposure to a dip in the real estate market. I think it could hit as early as February.

The “Infrastructure Bill” continues to make its way through the Senate with the support of both sides. There appears to be a huge gap in spending between the House (which is out for roughly 5 weeks) that wants $6 trillion and the Senate’s $1 trillion.

The debt ceiling has officially been past and Janet Yellen, Treasury Secretary, has been lobbying Congress to increase it before a government shutdown.

As a Capitalist and classical economist, I don’t agree with the policy, but I have learned I can’t change it. The increased spending will cause another wave of rising inflation.

JPMorgan’s Jamie Dimon this week echoed that sentiment, saying, “I do not agree with the Fed’s view that inflation is temporary. I think there’s a lot of stimulus that hasn’t been spent and a lot more stimulus coming. Having a fiscal deficit that big is unprecedented. That almost has to be inflationary.” Dimon warned that if inflation runs too high next year that the Fed may be forced to “jam their foot on the brakes,” and hike interest rates which could cause a recession.

This is a risk that El-Erian has also warned about for months. Dimon didn’t appear to be overly concerned about how the Fed is backing itself into a corner on inflation, rates, and the downsides. He did, however, put the situation into proper context: “No one has ever seen this kind of fiscal and monetary stimulus. And so we’ll be writing books about this for a hundred years.”

In other words, rising inflation is not temporary. We will likely see hyperinflation followed by stagflation if the US follows the current fiscal policy.

This week’s thin data slate is highlighted by July CPI (Wednesday) and PPI (Thursday). The numbers shouldn’t have much impact on the markets as it appears the prices are decelerating somewhat. Indeed, the y/y rates may be peaking. We expect gains of 0.3% for both the CPI headline and core, following June gains of 0.9% for both. As-expected July figures would result in a 5.1% headline y/y pace, slowing from the 5.4% rate in June. Core prices should show a 4.2% y/y clip, down from 4.5% y/y in June.

We also forecast 0.3% increases for July PPI headline and core, following gains of 1.0% for both in June. As expected readings would result in a dip for the y/y headline PPI metric to 6.9% from 7.3% in June, with the y/y core rate slipping to 5.4% from 5.6% in June. Other data this week include June JOLTS (Monday), Q2 productivity and costs (Tuesday), jobless claims (Thursday), trade prices, and consumer sentiment.

The Fedspeak will be monitored closely now that tapering is more in view. Bostic and Barkin, both current voters, speak (Monday) with the latter discussing the economic outlook. Mester, a 2022 voter, speaks on inflation risks (Tuesday). George will be at the annual NABE Economic Measurement Seminar (Wednesday).

Canada will be quiet this week with nothing on it data or events calendars. There is nothing scheduled from the Bank of Canada until the Senior Loan Officer Survey on August 16. The next policy announcement is on September 8. Our base case policy outlook remains for further reduction in QE to C$1.0 bln by the end of this year. However, the disappointing July employment report and uncertainty surrounding the rise of the delta variant has diminished the odds that there will be another cut in QE at the September announcement.