Customer claims in excess of $20 million have been registered by customers of longtime Morgan Stanley financial Michael Wagner. All three complaints were filed between November 2020 and November 2021 and relate to misuse and/ or misrepresentation regarding an options strategy. One of them has been denied.

The option strategies were often marketed as a way to suggest that this strategy could produce additional income, so long there was minimal market volatility. Investors can suffer unexpected and unneeded losses if the stock market is volatile, as it was in the fourth quarter of 2018 (and especially in December 2018).

Option investment strategies could have been or may have become, unsuitable for some investors. This is especially true if it was recommended to be a conservative or safe income-producing strategy. The risk that this investment strategy was not adequately disclosed to investors by the financial advisor/firm that recommended it may be that they failed to take reasonable steps in order to avoid unneeded investment losses due to volatility in the market.

Atlanta, Georgia-based Michael Wagner has been in the industry for 20 years. He had been initially a stockbroker and investment advisor with Merrill Lynch. However, he has been associated with Morgan Stanley from 2012 onwards.

$5,162,453 sought by the customer. Misrepresentations related to an options strategy have been alleged.

$15,708,558 sought by the customer. Employment of an unsuitable options investment strategy is the accusation. 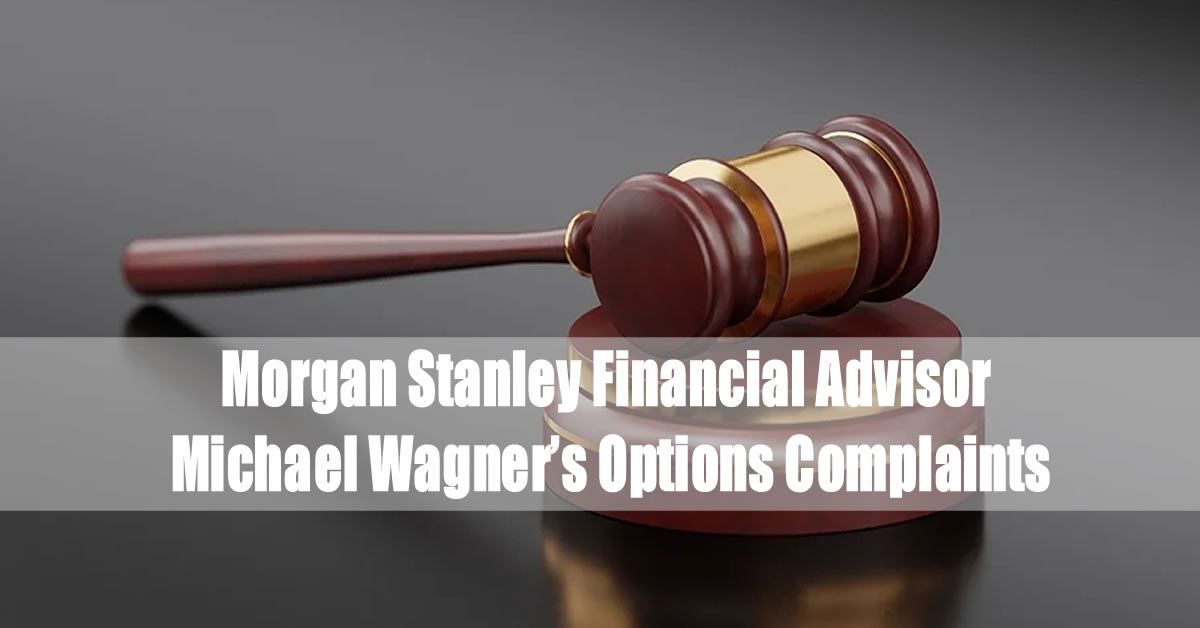 Supervision of registered representatives and their activities is a responsibility enjoined upon broker-dealers. Failure to do so could result in the firm being held accountable for losses incurred by a customer on account of negligence or misconduct of their brokers.

Morgan Stanley has been under the scanner for past supervisory failures, earning sanctions and penalties at the hands of regulators, apart from losses incurred by investors.

In June 2018, Morgan Stanley Smith Barney agreed to a payment of $3.6 million penalties resulting from an investigation by the Securities Exchange Commission (SEC). The firm had apparently failed to detect and prevent broker misconduct, mainly of advisor Barry F. Connell. Connell was accused of stealing $7 million from four customers’ accounts. He was sentenced to prison for investor fraud.

In August 2020 Morgan Stanley Wealth Advisors was asked to pay $949,000, including $774,000 in restitution on account of losses incurred in customer accounts through the actions of broker Kevin Gunnip and the firm’s inadequate supervision that permitted it to happen, as well as $175,000 in the form of a fine to FINRA (Financial Industry Regulatory Authority). The customers lost over $900,000 due to the broker indulging in excessive trading in their accounts,

Stockbroker misconduct attorneys at Haselkorn & Thibaut (InvestmentFraudLawyers.com) have been investigating claims involving former Morgan Stanley advisor Michael Wagner. If you have dealt with Wagner or otherwise believe you have lost money due to broker misconduct or negligence, we encourage you to contact them urgently to explore your options. They will protect your rights and help you put your best foot forward.

Haselkorn & Thibaut represents investors against Morgan Stanley and other broker-dealers and can be reached at 1-800-856-3352.