The 2021 stock market trading year is almost over. I certainly feel it is over-priced set to take a serious dip, but let’s not let you be confused about whether the glass is half full or empty. This year will still be an excellent year for investors, with the S&P 500 up over 24%! The world’s stock markets showed historic gains except for some Asian indexes. 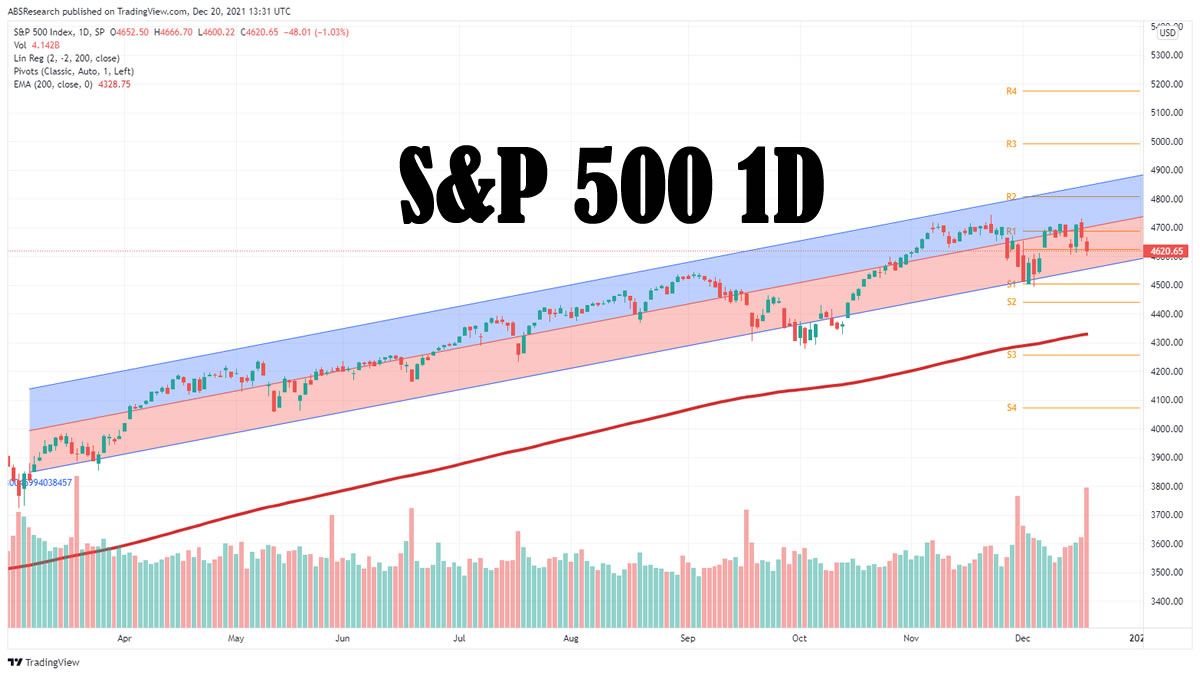 A Christmas rally is likely because many companies are making record sales (although some of the early numbers have been off) and that central banks are doing everything they can to help financiers follow their policy.

The central banks of western countries had set a monetary policy meeting for December 13-20. The exercise was not easy because they had to deal with a complex equation that included inflation, the floor rate, and the coronavirus. In addition, they also had to deal with overheated labor markets, global economic growth, and other factors.

The resurgence pandemic has caused November’s PMIs in manufacturing and services to fall below expectations over the last week. There will be less to do on the agenda with Christmas fast approaching in the next few days. Investors will be keeping an eye on the final US GDP reading for Q3 on Wednesday and on Thursday’s PCE inflation report and November durable goods orders in America.

Jerome Powell stated that the US economy is strong enough not to need the asset purchase plan, which was put in place to help the economy. It will be ending in March. The Fed also presented a detailed schedule for rate increases. Three in 2022, three more in 2023, and two in 2024. The central bank is slowing down inflation, and it was still expecting only one rate increase next year in September last year. Although the initial reaction was positive, markets became nervous the next day. This was especially true for companies in the Nasdaq, where high-value stocks were not happy about the possibility of losing liquidity. (Remember rising interest rates will pull capital from growth)

Based on yesterday’s Fed announcement, big banks have revised their rate hike forecasts. Goldman Sachs expects the Fed to raise interest rates in May and July 2022 and November 2023, respectively, and twice each in 2023-2024 to reduce inflation to a manageable level.

Federal funds rates are expected to rise to 0.85% by next year and to around 1.75 percent by 2023. If inflation exceeds expectations (e.g., Larry Summers’ runaway inflation scenario), Fed policy could become more hawkish.

Last week’s Federal Open Market Committee announcement by Jay Powell, Federal Reserve chair, also stated that the Fed will no longer use the term “transitory” and that inflation will likely stay above the 2% target for some time.

I currently expect to peak next year before stabilizing in 2023 and 2024. This could change due to the possibility that the Fed cannot control inflation by raising the federal funds rate. If this continues, prices as a whole will jump!

More importantly, I am hearing from insiders that there is the possibility of hyperinflation. We have seen rumors that the members of the US Senate think inflation could be 35%! It is hard to believe, but if a large spending bill is passed, it could happen. Currently, the spending bill is dead in the Senate. I will try to confirm these rumors and monitor it.

The Bank of England also unexpectedly raised its key rates, while Omicron dominates the UK. The ECB was happy to keep the status quo, but it announced that the program to end its asset purchase program to combat the pandemic would gradually end. The pre-existing repurchase plan will be maintained to avoid disrupting the markets. Rates did not change significantly as a result of these decisions. The Bund is at -0.38% and US 10-year debt at 1.4%, respectively.

The Turkish lira continues its decline against other currencies on the foreign exchange market, including the Euro and the Dollars. Under President Erdogan’s pressure, the Turkish central bank has reduced its rates to combat the rising inflation. Despite the firmness of the Fed, the Euro rose to USD 1.13143. The Bank of Japan also held this week’s monetary policy meeting, and it did not change rates, but it reduced its support for the economy.

The cryptocurrency market is seeing less joy than anticipated, with a break into the red that makes it difficult to absorb. Market players are now questioning the bullish continuation that has been established since the start of the year, with a drop of over 30% from the highs. Bitcoin isn’t catching its support, and it is dangerously close at $45,000 as of this writing. It has broken through the 200 moving average and support, but it could easily pop up to 60K in a day.

Investors who had expected that the Federal Reserve’s stricter tone would be accompanied by a rise in the dollar and a fall in commodities were disappointed this week. The opposite was true, and oil prices stabilized after an episode of volatility, as the Fed clarified its monetary policy. It broke the 200 moving average but is still trending bullish.

OPEC reiterated its willingness to intervene if necessary, even though the cartel described the Omicron variant’s impact on global oil demand as temporary and fleeting. Brent crude oil currently trades at USD 73.5 per barrel, while WTI trades above USD 71.

The week ended in near perfection for gold, which has now risen above USD 1,800 an ounce. The fall in the greenback is helping the gold, but so is volatility in equity markets, and there are short periods of confusion and euphoria in these markets. Notice that it has run level on the 200 moving average. Silver is also on the rise and trades at USD 22. The week ended in mixed sentiment for many base metals such as Zinc which rose slightly, but nickel dropped.