Matthew Clason, a one-time LPL Financial FA (financial advisor), has got 30 months behind bars, against a possible 20 years, for stealing several hundred thousand dollars from an elderly client. The sentence was announced by U.S. District Judge Michael Shea in Hartford, Connecticut, and also requires him to pay restitution of $639,580.

Clason, based in Cheshire, Connecticut, pleaded guilty to one count of wire fraud in May. He admitted to stealing over $600K from an elderly client who was not named. Currently, out on bond, Clason is required to report to prison on the 28th of February, 2022, as per the U.S. Attorney’s Office. 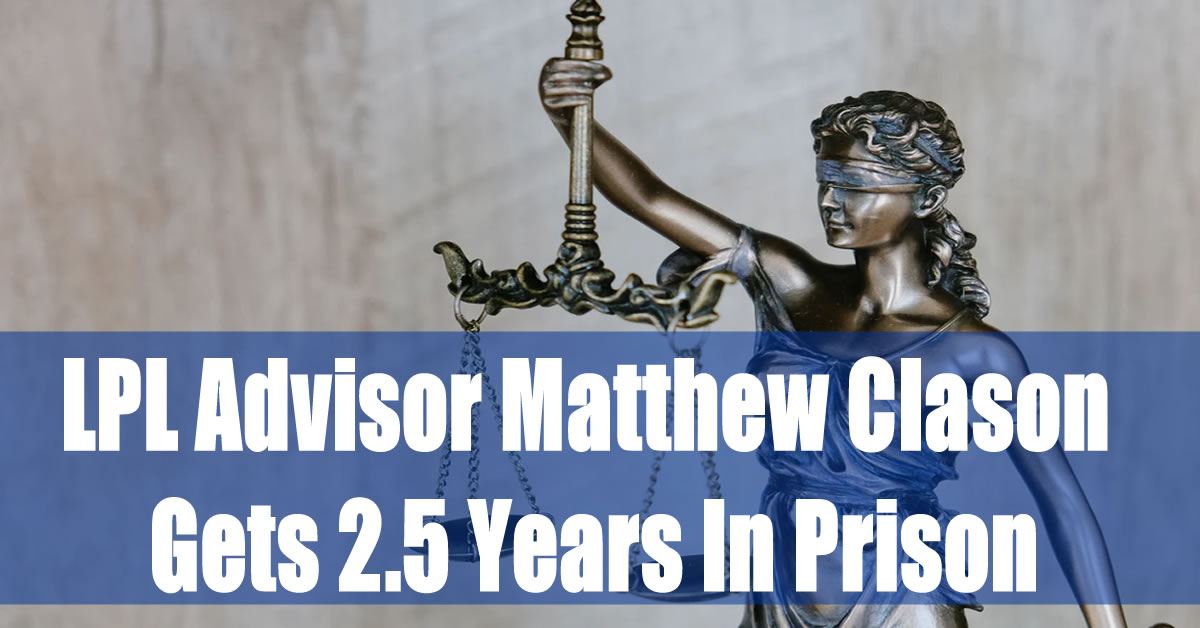 Financial abuse is a common problem with elderly people for many reasons. Sometimes, elder abusers may be suffering from mental impairments such as Alzheimer’s or dementia. These health issues can be exploited by the perpetrator to take control of their finances and then use them for their own gain.

Even if victims are in good health with no mental impairments they can still be targeted for financial exploitation, often from their closest friends.

Elder financial abuse most commonly occurs from adult children. However, it can also happen in nursing homes or assisted living facilities and from financial caregivers such as a power-of-attorney, trustee, guardian, conservator, or other financial caretakers. The Consumer Financial Protection Bureau advises you to watch out for any new friends who seem to be controlling and possessive of your loved one. This could be a sign that there is elder financial abuse.

Nursing staff or caregivers may take a resident’s credit cards or checkbooks in nursing homes or assisted living facilities.

Sometimes they may do other things that are harder to spot. For example, they might trick a resident into signing forms that transfer ownership in cars, homes, or bank accounts without their consent or knowledge. Or, pressure them into writing a new will.

When it comes to financial abuse, race is a significant risk factor. In 2010, a study showed that elderly African Americans were more likely to be exploited than non-African American residents (23.0% vs. 9.4%).

According to information made available by the U.S. Attorney’s Office for the District of Connecticut, Clason opened a joint bank account with the client (victim). Then he transferred over $668K from the client’s investment accounts to this joint account, from which he withdrew over $621K in cash apart from transferring money into his credit card as well as personal bank accounts, thus draining it out.

Clason has been in the securities industry from 2004 onwards. He registered with Lincoln Financial in 2007 and left them for LPL Financial in 2016, as per information available on his BrokerCheck record.

He was discharged by LPL in August last year on suspicion of maintaining a joint account with an LPL customer and that he “engaged in liquidations of securities in customer’s Firm account, transferred funds to joint bank account, and withdrew funds.”

In September 2020, he was barred by the Financial Industry Regulatory Authority (FINRA).

It was also in September 2020 that the Securities Exchange Commission (SEC) initiated action against him in the current case of theft from an elderly client. In view of the guilty plea in May, he was also barred by the SEC.