GWG Holdings (NASDAQ: GWGH) notified SEC on April 1st that it was unable to file its 2021 Annual Report within the required time frame after Grant Thornton LLP, its independent registered public accounting firm, resigned last year. According to the company, it was currently reviewing candidates. GWG Holdings Inc. shares fell 22% to $2.04 after the company claimed it received a letter stating that it was not in compliance with the NASDAQ Stock Market Listing Rules. This makes a 63% drop in value for the month!!! 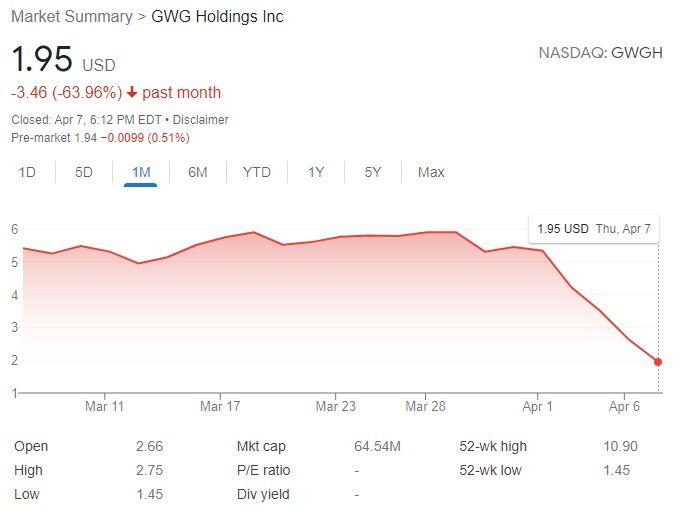 According to the company, the letter was received because it had not filed its annual Form 10-K report for the fiscal year ending Dec. 31, in time.

GWG Holdings stated that the letter had no immediate impact on the trading or listing of its common stock on the NASDAQ Capital Market.

The letter stated that the company must submit a plan to comply with Rule 5250(c),(1) within 60 days of receiving the letter. Nasdaq may accept the plan if it is approved. The company can regain compliance within 180 calendar days of the date the Form 10-K was due.

GWG is a sponsor of non-traded direct investments and a financial services company. The Nasdaq listing qualifications department sent a letter to inform the company that it wasn’t in compliance with a listing rule that requires timely filing of financial reports.

The NASDAQ letter has no immediate impact on the trading or listing of GWGH common stock. It requires that the company submit a plan to regain compliance within 60 days. GWG can be granted by Nasdaq up to 180 days after the date of the annual reports to regain compliance if the plan is accepted.

The Wall Street Journal reported earlier this week that GWG was planning to file for Chapter 11 bankruptcy protection.

According to reports, the company sold $1.6 billion worth of life insurance bonds through independent broker-dealers. In January 2022, it suspended sales of L bonds for eight more months. GWG also failed to pay a $14 million principal and interest payment in relation to its L bonds. FTI Consulting Inc. was recently appointed as the restructuring financial advisor for GWG, while Mayer Brown LLP was hired as the restructuring legal advisor.

GWG’s subsidiary, GWG, reached an agreement with one of its principal lenders. This agreement waives default and provides additional advance. It also includes terms that will be in effect if the lender provides debtors-in-possession financing (DIP). DIP loans are used to provide cash and working capital for debtor companies during times when cash is scarce. It would be preferred to any pre-bankruptcy loans if it is approved and used.

A public SEC filing dated Thursday shows that GWG DLP Funding VI LLC modified its credit agreement with National Founders LP in order to waive an event resulting from insufficient funds within a reserve account. The account had $500,000.300 cash, instead of the $2.5 million required. An additional $4 million advance was provided by the amendment, $1 million of which was used to pay the National Founders an amendment fee.

GWG reported in its third-quarter 2021 quarterly filing that nearly all its life insurance policies were pledged as collateral under two credit agreements: the LNV credit line and the National Founders credit line.

LNV Corporation has pledged 77 percent of the total face value of its life insurance portfolio to LNV Corporation and National Founders LP to 23 percent.

The filing also states that the life insurance policies of [GWG DLP Fining IV] and GWG DLP Fonding VI do not serve to secure the obligations of GWG Holdings under L bonds.

GWG stated in its third-quarter filing that it might need additional debt or equity financing. If this is not possible, it “raises [s] substantial doubt about the company’s capability to continue being a going concern within a year after these financial reports are issued.”