The 2.0% Q3 GDP growth clip exactly matched our estimate, though it fell short of most market forecasts (2.6% consensus), and likely undershot the GDP assumptions in the SEP from the September FOMC meeting by a big margin.

The third-quarter GDP was lower than the final 6.7% Q2 2020 estimate. This was a significant drop from the initial 6.7% estimate. It is now unclear how much further revisions will shrink the initial print, or if Q3 will be the low point in US GDP. 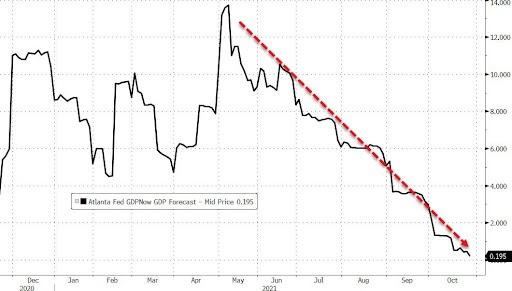 The slowdown in real Q3 GDP was caused by a slowdown in consumer spending. This dropped to 1.6% from 12.0% but was still well above expectations for a worse 0.9% print. Both goods and services spending was affected by transportation bottlenecks and rising prices. The investment was a positive contribution due to the restocking of depleted inventories by businesses. Trade was negative but has been negative for some time. As it was in recent quarters, the government was marginal. The supply-chain problems are the real problem. Consumers can’t buy as much as they want.

We saw some big offsetting surprises, with greater than expected weakness in the non-residential and residential construction data and surprisingly weak inventory data, but a stronger than expected set of net export data, and a small rise in government purchases.

Consumption spending rose by 1.6%, which fell modestly short of our assumptions but beat most market estimates.

The component mix left a -0.1% Q3 contraction rate for final sales that was modestly weaker than we had assumed, and an inventory liquidation rate of a hefty -$77.7 bln.

For the major components:

We saw a hefty 5.7% Q3 GDP chain price gain, but expected PCE chain price gains of 5.3% for the headline and 4.5% for the core. The Q3 GDP figures document the escalating supply chain and port bottleneck disruptions that prompted a big Q3 net export subtraction and inventory addition, though inventories remain in deep liquidation for a 3rd consecutive quarter, and for 5 of the last 7 quarters.

We also saw a sharp slowdown in consumption growth due to the effect of unwinding stimulus spending, though we’re also seeing a sales hit from vehicle shortages. We have a pullback for business fixed investment and a big drop in residential investment before a likely winter bounce due to diminished seasonality for the industry.

Trade remains depressed by limited international travel, which may recover somewhat into year-end.

Before supply chain and port disruptions accelerated into the close of Q3 we had expected Q3 growth closer to 7%. Reports through September and October revealed substantial disruptions that were exacerbated by hurricane Ida.

The Fed revised its 2021 U.S. GDP growth estimates massively lower at the September 21-22 FOMC meeting, but weakness in reports after the meeting leave room for massive further downward revisions in December.