Sentencing has been done for Phillip Conley of Jacksonville, Florida on charges of defrauding pastors and churches, and others, in West Virginia, to the tune of $5 million. He is required to serve 87 months behind bars, as informed by William J. Ihlenfeld II, U.S. attorney for the Northern District of West Virginia.

It might be recollected by some that a federal grand jury had indicted Conley, formerly a broker with Merrill Lynch, last year. He also stood accused by the Securities Exchange Commission (SEC) in connection with a complaint in 2020 of defrauding churchgoers as well as pastors and some others out of $5 million in the period between January 2014 and September 2018.

He was suspended by the Financial Industry Regulatory Authority (FINRA) on the 3rd of December, 2015 as he had failed to honor an arbitration award by them. This was highlighted by the SEC at the time, in August 2020, of his indictment on one count of securities and six counts of mail fraud.

Earlier, Conley has pleaded guilty to one count of securities fraud as well as defrauding victims spread across several states of multiple million dollars. 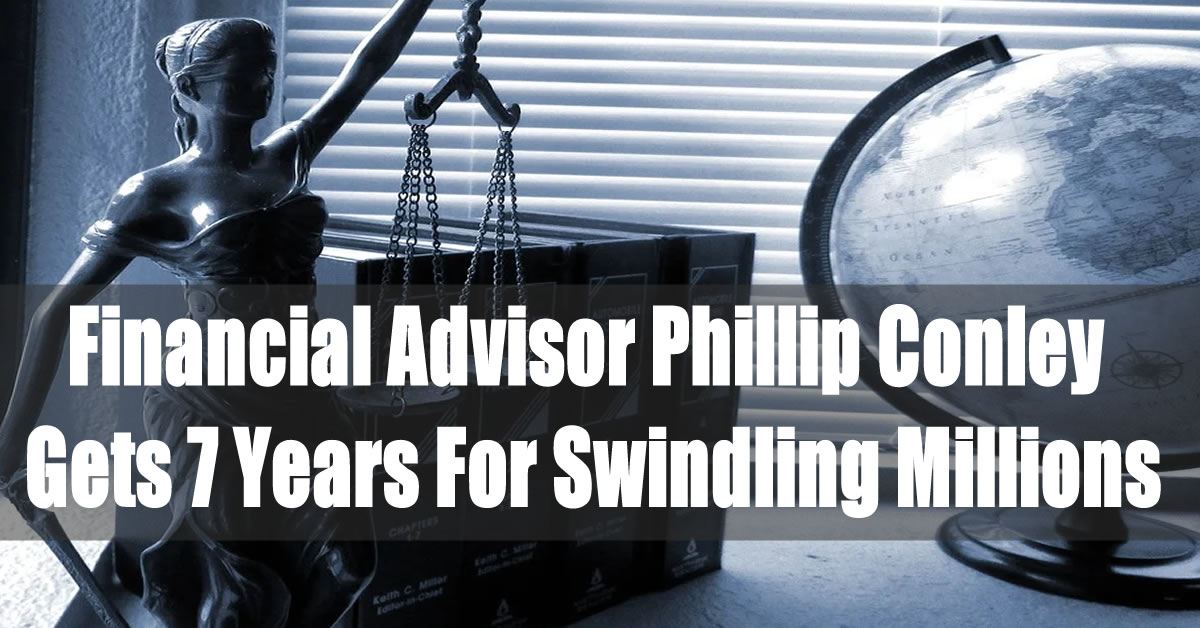 Track record and strategy of fraud

Prior to his suspension by FINRA, he had worked for seven years in the industry and notched up five disclosures on his BrokerCheck profile. Merrill Lynch was the last broker-dealer he was associated with for whom he worked between 2012 and 2014.

There was no comment from Merrill Lynch on the case.

Even after his broker license was suspended by FINRA in December 2015, Conley is understood to have continued to introduce himself as an investment advisor, as informed by Ihlenfeld.

He started a company by the name of ALPAX and solicited, and received, investments for bogus ventures like oil and gas technology, student housing construction, mineral and timber leasing rights as well as high-yield fixed-income securities.

He followed a strategy of providing investors with cooked-up dividend statements that had concocted values of their investment accounts, again as advised by Ihlenfeld. This may have provided some investors with a sense of security in the early stages.

Churches in Parkersburg, Charleston, and in West Virginia were victims of his schemes, as were owners of much small business. Even his friends and family members were not spared, Ihlenfeld says.

What happened to the money?

As normally happens in cases of fraud, the money was spent on his lifestyle expenses and included designer clothes, fine dining, private jets, housing, and living expenses, and jewelry, advises Ihlenfeld.

In a statement, Ihlenfeld has stated that “Securities fraud is a terrible crime and often has a devastating impact. Conley was very persuasive and groomed his victims, convincing them that these were legitimate investment opportunities. Unfortunately, it was a scam in which Conley robbed investors of their life savings.”

FBI Pittsburgh’s special agent in charge. Mike Nordwall says that “Conley lived a luxurious life, but in reality, lined his pockets by orchestrating a multimillion-dollar fraud scheme that took money from his own family members and other victims.”

Apart from the incarceration, Conley is required to forfeit property purchased from the proceeds of his ill-gotten gains and pay $4.9 million as a monetary judgment. The prison sentence will be followed by 36 months of supervised release.

He was also charged a special assessment fee of $100.