TIP – This is a brief bullet-point summary. It is a tool that gives investors and financial advisors a fast and simple list of what to news and market data watch that may move the markets.

Investors will be on the lookout for more interest rate realism next week when Federal Reserve Chairman Jerome Powell testifies before Congress, where he is expected to stress the importance of aggressive rate hikes to combat inflation. Next week’s economic indicators include existing home sales updates on June 21, initial unemployment claims on June 23, and the University of Michigan consumer confidence measure on June 24, which might set a new low. 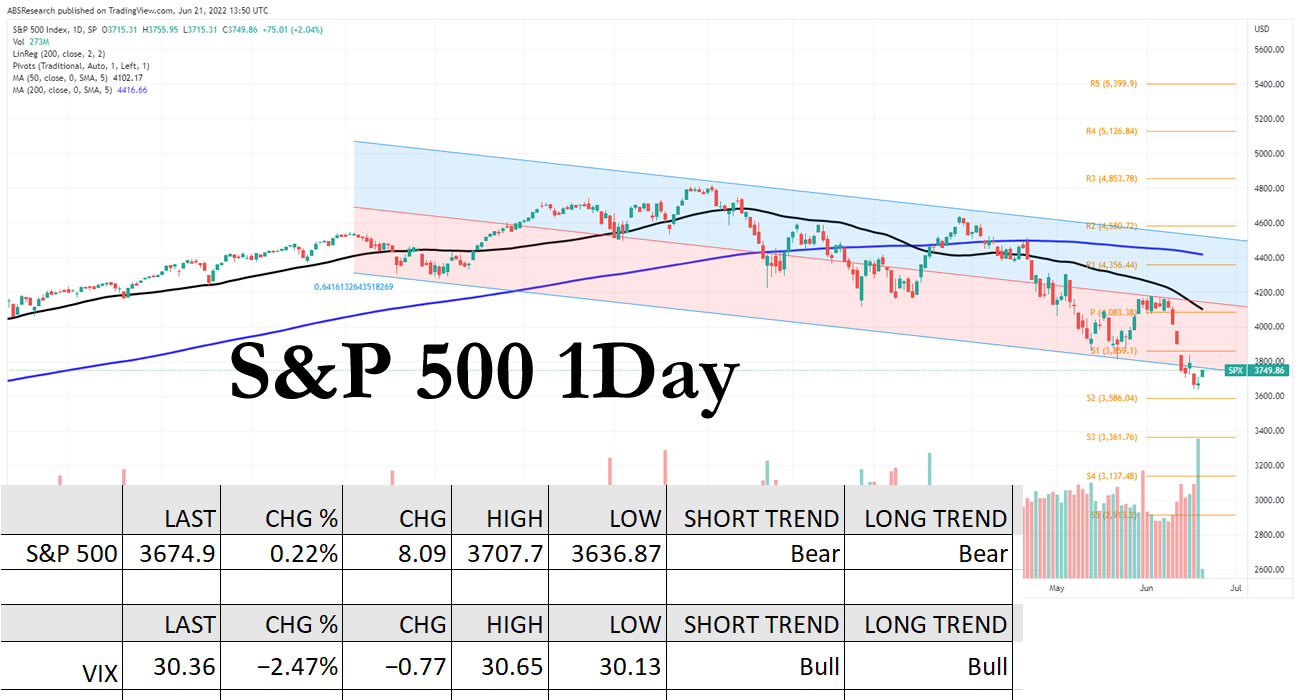 Tip: Use this section to know various sectors’ performance, and weight portfolios, or look for trades. Modern portfolio theory stresses the importance of diversification, but recently several sectors like technology have outperformed others like utilities. This is also a way to narrow the sectors to find investment opportunities.

The Financial industry is again encountering tension last week amid the inflation in established jurisdictions, including the U.S. and U.K., still being at an all-time high. The inflation levels in both jurisdictions are estimated to be at a 40-year level.

As a result, a group of anxious central banks rapidly increased the rates.  Most large banks that increased their rates include Swiss National Bank with an increase of +0.50% and the Fed with a +0.75%, among others. The increase in rates also raises the vitality accompanying the Quadruple Witching Day and the amount of clearing required.

The central banks’ rate aggressive rate increase is causing concern among investors. However, the decision of the wealthiest and most extravagant individuals to close off the liquidity valve is raising fears of depression amidst the required shock brews. Moreover, the recent inflation indicators occurring in jurisdictions including the U.S. and Europe are barely encouraging.

In the upcoming weeks, several investors are keeping the hope that their contributions to salvage the economy don’t backfire. Investors also intend to seek the rhythm in which the central banks will lessen some of the restrictive rules recently put in place.

Currently, the investment firms will proceed with reviewing the economic growth assumptions, and the prediction made by the Federal Reserve estimates the GDP growth to be 1.7% for 2022 and 2023 and an increase of 1.9 in 2024. The growth rates are subject to changes that occur weekly. However, the predicted estimates are lower than those recorded in the past. Thus the low GDP numbers are an indication of a struggling economic system. In addition, other investment firms, including Fitch Ratings, recently reviewed and predicted that its 2023 GDP profits will decline to 1.5%, followed by a drop in 2024 to 1.3%.

Jay Powell, the Federal Reserve Chair, stated that the retail sector’s performance seems to be relieving the economy; thus, implementing restrictions will lead to heavy demand. Powell further said that due to the increase in mortgage rates, the listing prices of the homes should decrease.

However, Powell reiterated that the home prices might keep increasing because of supply restrictions, including the absence of inventory. Moreover, inflation has made it too expensive for most people to buy houses; thus, fewer individuals will be interested in purchasing homes.

The recent publication of the Producer Price Index (PPI) presented evidence that indicated a rise in the inflation levels. Last month’s PPI recorded a rise of 0.8%, which predicted the increase in the input costs; thus, the customer disposed of the raised fees. With several food organizations increasing their retail prices, the Bureau of Labor Sciences revealed that 30% of May’s PPI was due to constraints, including transport expenses and labor shortages. 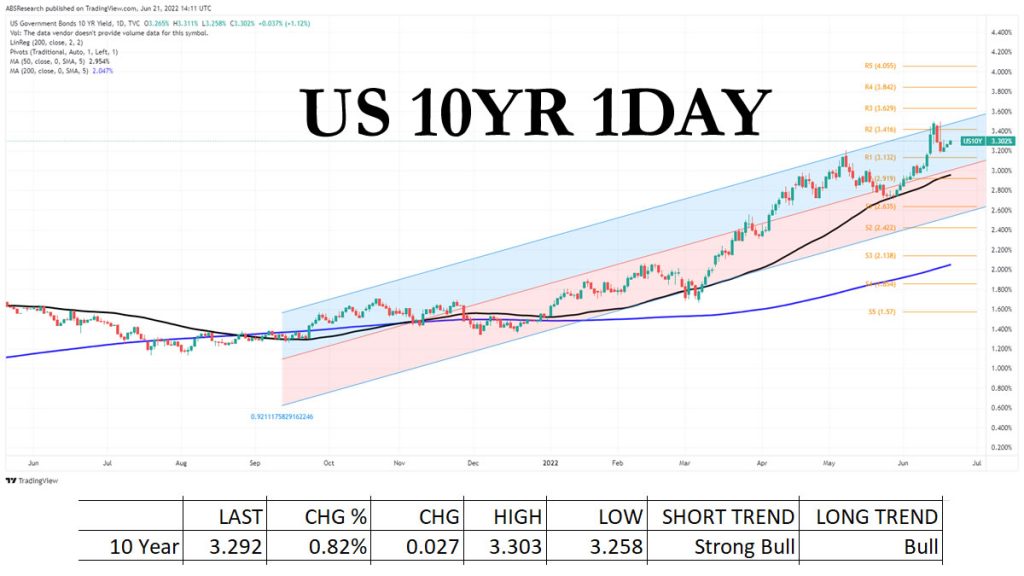 The number of interest rates amid the inflation

This week’s financial results caused a lot of motion in the financial industry in both jurisdictions; benefits were unpredictable due to the uncertainty of the Federal Reserve. The week’s conclusion led to the vanishing of the benefits curve to a 3.2% drop in the U.S.; in Europe, the impact of the German and Italian debt reintroduced the specter of 2012.

Other European organizations, including the European Central Bank (ECB), conducted an emergency board meeting and declared that they would commence an initiative to balance the economy’s fragmentation.

The move thus enabled the jurisdiction to maintain its investors and seek refuge in the Northern hemisphere. Eventually, the initiative bore fruits when the German debt decreased by 200 points. 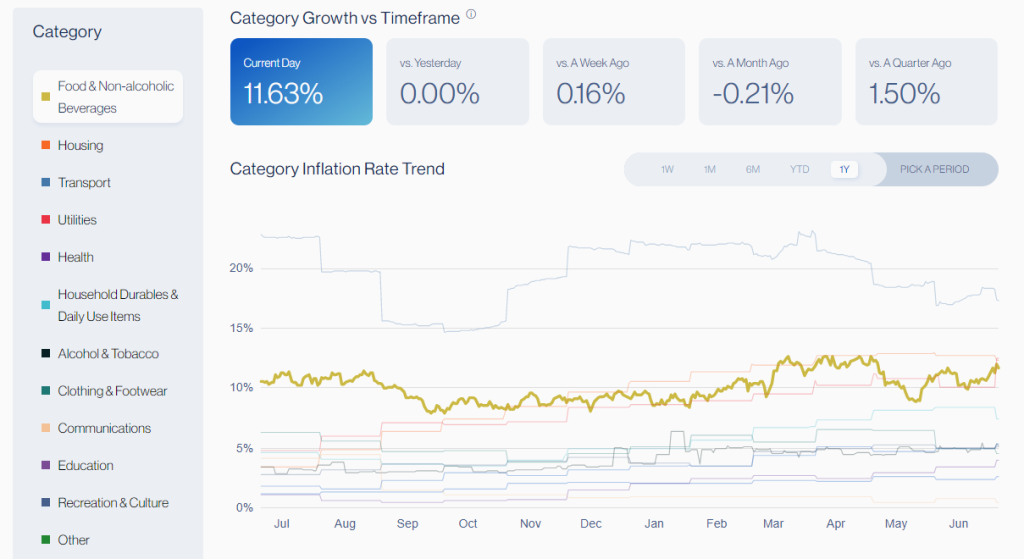 Decentralized finance (DeFi) firm Truflation is based on the same calculation method as the CPI but is different in that it uses real “price data” versus the government’s survey data. It uses current real-market prices data from Zillow, Penn State, and Nielsen to measure and report inflation changes each day.

Certain valuable goods, including oil and metals, also encountered challenges, such as falling prices to suitable trading amounts. However, the looming inflation predicts that this won’t be for long. China recently released adequate data on metals mining, revealing that the mining and trading amounts might be better than anticipated.

However, several predictions are that the oil prices will rise quickly in the next year; the supply challenges will add to the variation of supply and demand. Therefore, the regulatory bodies offered temporary solutions, including obtaining significant reserves to raise the collection. However, this will not only impact the prices but vanish after the introduction of the implementations.

In an address made to various oil officials, President Joe Biden equated the country’s predicament to a time of war Biden then announced that the efforts made were unsatisfactory, even though the refiners functioned at a 94% capacity. The address further alleged that the officials were taking advantage of the plight by demanding to increase the oil production.

Gold has recently dipped due to recession fears and the rising US Dollar. However, we do believe it is in a BULLISH trend and should come back.

In other news, cryptocurrencies are scrapping 20% of their capitalization and are now estimated to be $20,550. Following a loss of 70% since its peak last year, analysts claim the decrease could continue due to the unpredictability of the economy.

Many cryptocurrency firms, including Terra Luna, have collapsed due to this, leading more countries to discuss regulating the industry. Others believe another loss as significant as Terra Luna could have devastating consequences on crypto investors, and setting up rules to protect its citizens seems the best way to go.

Just a few years ago, cryptocurrency had been rapidly progressing. As a result, more investors joined the space. Some businesses even began accepting crypto payments for goods and services, such as Lush and WeWork in the U.K. However, this shift makes things uncertain and puts the economy at risk.

Amid the week, several central banks expect to address their consumers on the way forward. The addresses will allow authoritative bodies such as the Federal Reserve to polish up their contents. The following PMI publication will detail how many challenges the financial managers are facing.