The current stock market rally began in early October. Since then, the S&P 500 (NYSE: SPY) has increased by nearly 15% to hit new, all-time highs. Some reasons behind the buying were the Fed pivoting to a more dovish path by increasing the threshold to raise rates, positive progress in the US-China trade dispute, massive amounts of bearish sentiment, and expectations of manufacturing turning around.

Another factor behind the rally’s strength and staying power was a large number of fund managers were underperforming and underexposed to equities. Thus, many were forced buyers to ensure that they didn’t underperform their benchmarks by a significant amount. It’s this precise action that ensured that stocks barely dipped over the last three months of the previous year.

Catalysts No Longer Valid in 2020

So far in 2020, the price action and behavior of stocks have mirrored that of the previous year. However, this time the dynamics are no longer as supportive. The sentiment is now wildly bullish on short and intermediate-term timeframes. This is evident from a variety of indicators including the low Vix which shows that premium on put options is cheap, the low put/call ratio, and investor positioning. Additionally, fund managers are fully invested with cash balances near record lows. One composite way to look at sentiment is with the CNN Fear/Greed index which is currently indicating “Extreme Greed” with a 92 reading. 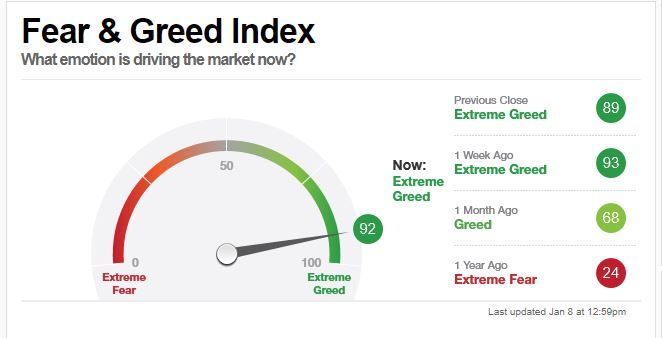 Beyond sentiment, there are more reasons that traders and investors should cultivate more fear and respect that equities are quite risky at these lofty levels. Another risk is that equities have furiously rallied in anticipation of manufacturing bottoming and the US-China trade deal’s approval unleashing a wave of pent-up demand that would lead to an acceleration in economic growth. Equities have already discounted this scenario. This is evident from the overall market’s performance and outperformance in cyclical stocks.

Therefore, manufacturing data needs to confirm the stock market’s optimism, or they could seriously tumble. It’s certainly positive that escalations in the trade dispute between the US and China have ended, and tariffs are being reduced or delayed. However, it’s still too early to say whether the “phase 1” deal will be made. Key differences remain especially on intellectual property, and previous agreements have fallen apart in the closing moments.

In October when there were more uncertainty and higher bearish sentiment, one interesting development was outperformance in cyclical stocks for the first time in many months. This was an indication that the stock market was anticipating some positive newsflow, and it proved prescient. Now, these sectors are showing signs of distribution even as the broader market powers higher. 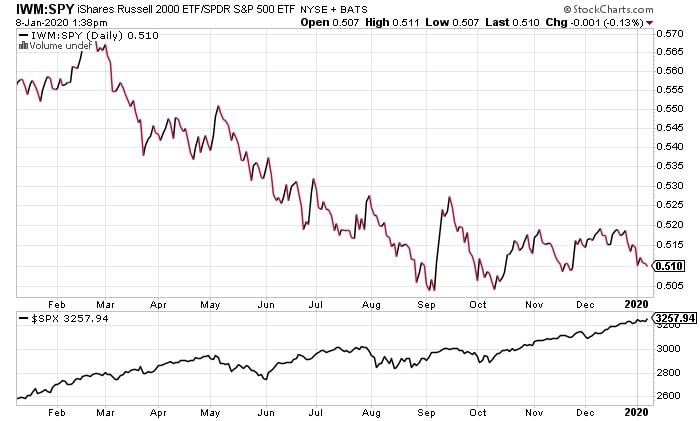 Active traders can take advantage of this circumstance by shorting stocks when SPY is under 324 which marks the year’s opening level. Despite the newsflow and bullish sentiment, the market has basically gone sideways so far.

Investors should pay attention to the nascent double-top formation that may be forming in the S&P 500 and be patient waiting for the next buying opportunity. The market’s primary trend remains higher, but a correction to reset sentiment and create another set of low-risk opportunities would be healthy for this bull market.