The much anticipated CPI report came in this morning Inflation soared in January to a new four-decade high. Strong consumer demand and pandemic supply-chain snarls drove rapid price increases that negated the benefits of rising wages. According to a Labor Department report, January’s consumer price index increased 7.5% compared to a year ago. This is the fastest increase since February 1982 when inflation reached 7.6%. CPI, which measures a variety of goods including gasoline, health care, groceries, and rents, increased 0.6% in January from December.

Many consider the most important economic indicator to be the Consumer Price Index (CPI). It is used to measure inflation and the cost of living in a country. It is a combination of goods and services. The basket price is calculated as the average retail prices of all constituent items.

CPI reports are released monthly, but they also come out on a quarterly and yearly basis. CPI reports are periodically released to allow us to analyze the changes in prices over time for both individual items and the entire basket.

The inflation rate is the rate at which the basket’s price changes over time. CPI was created in World War I, when an unusual rise in prices led to the creation an index to calculate cost-of-living adjustments. CPI figures were first reported in 1984 with a baseline value of 100.

This month economists predicted that the index would show that prices rose 7.3% in January compared to the previous year, and 0.5% monthly.

Core prices, which exclude volatile measures of food and energy, rose 6% in January compared to December’s 5.5%. This was the largest 12-month increase in price since August 1982.

New cars were the only soft component. The high level of pressure across goods is likely due to ongoing supply chain constraints that have yet to show signs of material improvement.

Rents in services remained hot with OER increasing by 0.42% mom, and rent of primary residence rising at a 0.54% pace — the strongest monthly growth since October 1992. The tendency in labor markets and stronger wage growth likely underpin the rent trajectory.

This trend could heat up further in the coming months. The December increase in medical care services was a whopping 0.6% mom, which is more than twice the rate of December. Hospital services rose 0.5% mom due to Omicron case surges. Health insurance rose 2.7% mom. Professional services grew 0.2% because doctors seemed unaffected by the 0.75% Medicare cuts.

His approval rating fell below 40 for the first time and is now much lower than that of President Trump during this term. President Biden realized he needed to address the fact the average American is seeing prices for consumer goods rise at an alarming rate.

A great chart and tweet from Zerohedge shows what has happened in the past when the Fed starts tightening. Given the HUGE amount of funds infused into the M1 money supply, we could see a massive market pullback. 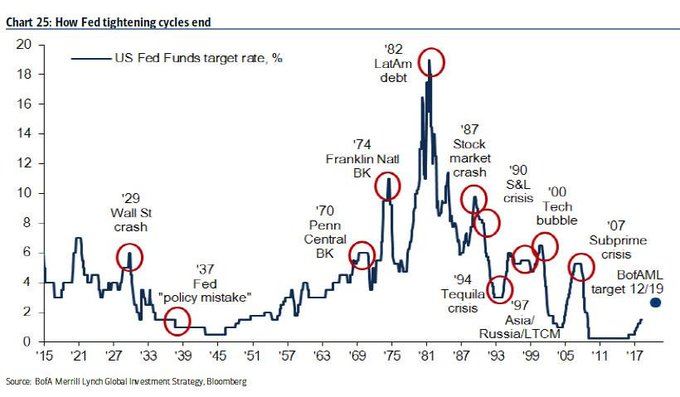 Biden is basically telling Powell to initiate a recession in order to reverse the disastrous effects of his stupid fiscal policies, which have sparked the largest inflationary conflagration ever since Volcker.