The private sector created more jobs than expected in September but the slow pace of growing signs has made the labor market more intense, according to Wednesday’s report from ADP and Moody’s Analytics. 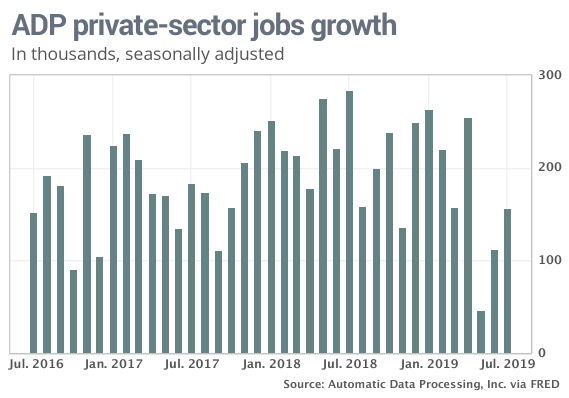 The September gain was the delay from June and introduced the 2019 monthly average down to 145,000, a sharp decrease in the 214,000 for the same period last year.

The numbers are among the growing concerns about the strength of the economy. Tuesday Reading from the Manufacturing Manufacturing Institute It showed that the sector is entering into a contract, although it is not yet compatible with a recession. However, other economic data was particularly strong, particularly on the consumer side.

Atlanta Fed’s GDP Tracker is focused on increasing 1.8% in the third quarter, even under the CNBC Quick Update phase with 1.9% growth.

Report economists based on ADP numbers. In September, however, expectations are similar: economists surveyed by Dow Jones are looking for an estimate from the Labor Department on Friday to show payroll growth of 145,000 and the unemployment rate steady at 3.7%.