The oil price could not breakdown the support level of 53.63 and is now trading at 54.31 with an increase. The demand for “black gold” is caused by the deterioration in relations between the US and Iran after Iran sold oil from its field.

The purchasing company has not yet been named but Washington has already stated that any cooperation with Tehran would have negative consequences. In addition, the instrument is supported by sanctions against Venezuela and a ban on the sale of energy. However, according to Reuters, some of the products can still be sold through the Russian company Rosneft, which resells oil to China and India. So, over the past month, about 40% of total exports were sold. The tension between the US and China has decreased: the US authorities have reported several phone calls from China, and it is likely that negotiations will resume and trade disputes will come to an end. 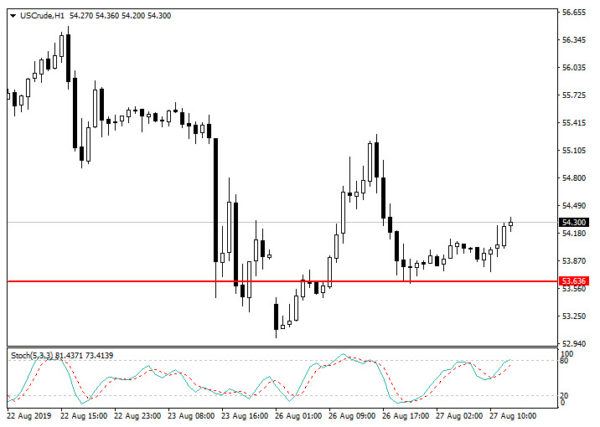 Today, traders will pay attention to the publication of statistics on housing prices in the US and the American consumer confidence index.

Long positions can be opened from the current level with the target at 55.50 and stop loss 53.63.

Stochastic is at the level of 77 and does not give signals for the opening of the positions.